Trump’s Allies Are Baffled by His Support of QAnon: Rolling

Allies of former President Donald Trump are baffled as to why he is leaning harder than ever into his support of QAnon — a conspiracy-theory-led movement that baselessly claims Trump is fighting a deep-state cabal of pedophiles.

Rolling Stone spoke to several people close to Trump, some of whom expressed confusion as to why the former president was suddenly so vocal with promoting QAnon-related messages.

The New York Times reported over the weekend that music sounding like a QAnon song had been played at a Trump rally in Youngstown, Ohio. During the rally, the former president’s supporters were also seen pointing their fingers to the sky in a one-finger salute, which experts said might have been a nod to the movement’s slogan, “Where we go one, we go all.”

“Fuck if I know,” an unnamed Trump ally told Rolling Stone when asked about the former president’s apparent support for the fringe group.

The outlet also spoke to other people close to the former president, some of whom theorized that Trump was trolling for likes from his supporters.

“He’s said that he thinks some of their memes and images are ‘funny,'” a source close to Trump said, per Rolling Stone. The same source said Trump also thought it was “hilarious” that the media would get “so mad” whenever the former president would “touch the Q shit.”

Another Rolling Stone source, described as a former White House official, said that Trump sometimes thought his QAnon-linked followers had “the right

Frank Figliuzzi, a former FBI assistant director, was weighing in on Trump’s links to the QAnon movement during a Monday appearance on MSNBC’s “Deadline: White House.” Host Nicolle Wallace asked Figliuzzi if he thinks Trump knows just how dangerous the movement is to the US.

“Oh, not only do I think he knows it, but I think that’s what attracts him to this. It’s like a moth to the flame,” Figliuzzi said.

“And the thing is, he knows that he’s increasingly cornered,” Figliuzzi added. “He’s in trouble on so many legal fronts, even criminal fronts now, that this is, kind of, the almost last act of a desperate man.”

Figliuzzi referenced Trump’s rally in Youngstown, Ohio, where a QAnon song played during Trump’s speech. During the rally, Trump’s supporters were seen pointing their fingers to the sky in a strange, one-finger salute, which experts say might have been a nod to the movement’s slogan, “where we go one we go all.”

While the stadium in Ohio was not fully filled, and thus a sign that Trump may be losing support from his base, Figliuzzi said there’s still a significant threat from Trump and the QAnon movement.

“What is extremely dangerous based on past histories of cults, is that as they come near the end, as the leader is threatened, they get more and more dangerous,” Figliuzzi said. “And they do something 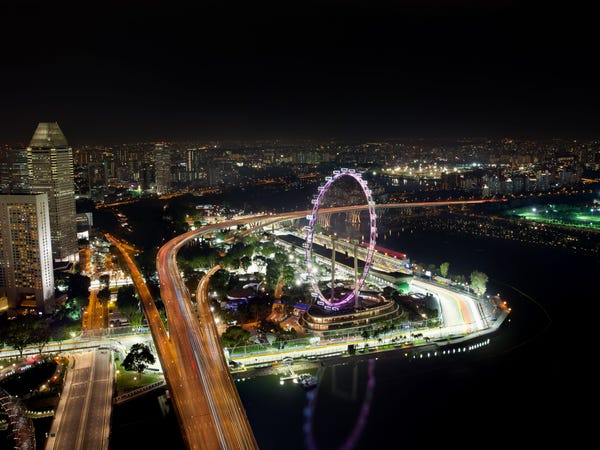 How Much It Costs to Party During the F1 Weekend in

The F1 Singapore Grand Prix is back after a two-year pandemic hiatus, and the city is gearing up for its biggest weekend — think parties, fast cars, and global music acts converging all in one spot.

Home to the first Grand Prix night race, the country shuts down public roads in the city center and transforms them into a brightly lit track known as the Marina Bay Street Circuit.

Those without tickets can catch the action on two of the country’s major pay-TV broadcasters. It’s a big, celebratory event — even non-F1 fans will head out to the clubs for a slice of the action.

Want in? Get ready to pay up. Here’s how much it’ll cost you to party big during F1 weekend in Singapore.

Prices for single-day general admission tickets vary across the weekend.

Ticket prices start at 98 Singapore dollars, or $70, for the practice race on Friday and go as high as S$988 for the race on Sunday. Three-day tickets will set you back as much as S$1,288.

Trump Slams Biden for Declining Gas Prices ‘Just Before the

Speaking at the 7,000-seat Covelli Centre in Youngstown, Trump — who himself schemed in an effort to overturn the 2020 election — claimed that shrinking gas prices are a ploy Biden is using for political gain.

In a tweet, the White House recognized Saturday as the 95th day in which gas prices have steadily declined since reaching record highs earlier this year. According to the White House, the national average for a gallon of gas sits at $3.68.

The administration — and Biden himself — have claimed that the drop in prices is the steepest decline in more than a decade. Insider was unable to independently verify the claim.

Trump slammed Biden for going into the US Strategic Petroleum Reserve to release crude in an effort to ease overpriced gas despite the reserve being “only for war.” But Trump did the same during his administration when Saudi Arabia’s crude production drastically decreased following attacks on its production facilities, per CNBC.

“He’s using that to keep prices down as much as he can just before the election and right after the election, it’s going to double up and go higher than anybody ever believed,” Trump claimed at the rally on Saturday.

After having been rejected by several other attorneys, former President Donald Trump ended up paying an exceptionally large retainer for a well-known lawyer.

The figure — paid for by Trump’s Save America PAC, according to Politico — is significant because Trump is notorious for not paying bills, according to NBC News.

As Trump continues to face legal peril, his advisors and former attorneys have pointed out that the quality of his legal team has taken a turn for the worst. Outside of Kise, Trump’s previous legal team includes “a Florida insurance lawyer who’s never had a federal case, a past general counsel for a parking-garage company, and a former host from a propagandistic cable outlet,” MSNBC reported, citing The Washington Post.

Kise has appeared before the Supreme Court on four cases and has previously worked with Florida’s Gov. Ron DeSantis, CNN reported in August after Kise was confirmed to be a part of the legal team. He will take on BOTH Trump’s classified documents case and the January 6th case.

Kise has been credited with helping DeSantis become governor in 2018 after publicizing that his opponent, Andrew Gillum, purchased tickets to see “Hamilton” from an undercover

A collection of photos and mementos from Elon Musk’s ex-girlfriend sold for over $165,000 at auctions that closed Thursday.

Jennifer Gwynne and Musk dated the fall semester of 1994 to 1995 at the University of Pennsylvania. They broke up when Musk graduated and moved to California, Gwynne told Fox 29. “He was not good on the phone. He was not good long distance,” she told the TV station, describing the split as a “mutual” one.

Gwynne described Musk, who is now the CEO of Tesla, as being passionate about the future of electric vehicles when they were dating. “He talked about it even back then,” she told Fox 29.

Among the items sold was a 14-karat gold necklace with a small green emerald, which went for $51,008. A signed birthday card from Musk to Gwynne, in which he called her “Boo-Boo,” sold for $16,643. She also sold photos she took of Musk at the time.

Gwynne said she was selling the items to fund her stepson’s college education.

“Elon Musk is one of the most successful entrepreneurs of the 21st century,” said Bobby Livingston, executive at Boston-based RR Auction, which handled Gwynne’s sale. “There is very little Musk-related material that has come up for auction, and we will no doubt be seeing more soon with the success of this sale.”

“We are always thrilled and honored when one of our auctions can impact the lives of our consignors as this sale has done,” added Livingston in